Love and Compassion Is My Religion: A Beginner’s Book into Spirtuality
Jane Zarse (Author) 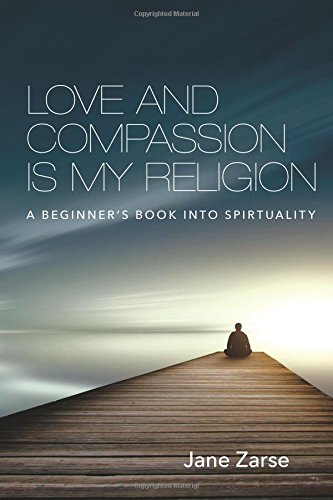 Jane Zarse grew up the child of privilege in Lake Forest, Illinois. She attended a prestigious academy, drove a new Audi to school, and discovered the love of boys. She also discovered alcohol—which quickly became her crutch.

In Love and Compassion Is My Religion, Zarse gives readers a heartfelt look at how she finally learned to love herself, climbing back from hitting bottom with the love of God. She fought bulimia and drank to excess after graduating from Boston University, then worked first as an actress and later as a high-volume trader at Chicago’s Options Exchange. She lacked compassion for others, but didn’t realize why until much later. The reason? She didn’t love herself.

But everything broke open after Zarse’s mother died of a heart attack and she divorced her husband. At first the downward spiral was steep, but then she found the strength to pick herself up and finally seek help.

Love and Compassion Is My Religion is a guide to finding your spiritual self—no matter how much you’ve sinned or lost yourself. It’s a guide to how to find your way back. Zarse using her own excesses as an example, shows how it can be done.

Start reading “Love and Compassion Is My Religion: A Beginner’s Book into Spirituality” by Jane Zarse on your Kindle in under a minute.

Love and Compassion Is My Religion: A Beginner’s Book into Spirituality
Jane Zarse
ASIN: B01C2Z8OW6