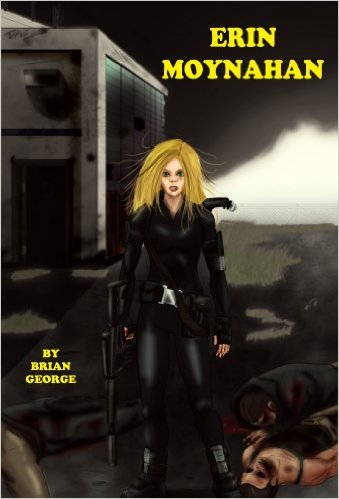 Erin Moynahan by Brian George is a teenage superhero tale of mystery, science fiction, family, and what it means to be human.A brilliant mother may have saved her life with an experimental serum, but Erin begins to question what sort of life she will be living from then on in Brian George’s “Erin Moynahan”. The story acts as a superhero origin tale, while also wrapping an air of mystery around and through the rest of the narrative, especially concerning her family. Fans of mystery, science fiction, the superhero genre, high school life, and stories that simply break the mold will find “Erin Moynahan” by Brian George riveting and enveloping. The line between what makes a set of abilities a gift or a curse is crossed and examined thoroughly throughout this book. Along with that notion is a question of the nature of humanity, as Erin changes and adapts with her new higher intellect and physical prowess.

This story takes a critical look at where human may become superhuman, and what that could mean for the average person. Set in a recognizable view of the world, it is easy for the reader to feel like he or she is a part of the story. This means that the audience can not help but find themselves invested in what happens to Erin, curious about what she will do next, and at times worried or even scared for the characters. The writing is heartfelt and vivid, and the story itself is engrossing and layered. The nature of the story itself lets the audience think about what kind of responsibilities can come with the kind of power Erin is given. This leads to discussions of what that means for a teenage girl who already has the typical problems of someone that age. Some readers may find themselves asking how much would be too much for them personally, if they were to be in Erin’s position. Truly, this is a case of ‘what doesn’t kill you makes you stronger’ and is well deserving of a read. Brian George’s “Erin Moynahan” can be purchased through a number of avenues, and is worth much more than the price. – GoodbooksToday.com Reviews

Start reading “Erin Moynahan” by Brian George on your Kindle in under a minute.